Where are My Friends? Adjusting to Life as a Leader 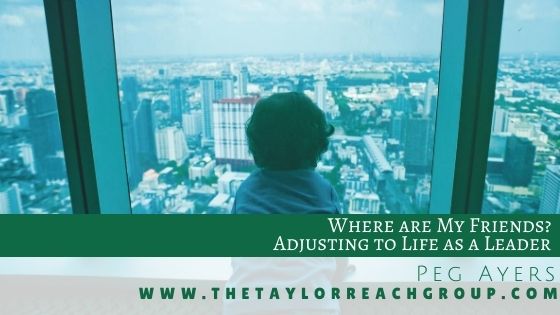 a little less than his share of the credit.

In my years in contact center leadership, my team and I debated many topics and searched for answers to such burning questions as, “Should we allow people to wear shorts to work?”, “Is one minute late REALLY late?”, and “Are you sure we should do ‘Take your child to work day’ again?”.  But the one we spent the most time on, because it was the most critical to our success was, “How do we help our supervisors better lead their people?”

Like most contact centers, we nearly always promoted from within: posting supervisor positions, interviewing candidates, reviewing their current work, and offering the promotion to the person we thought would do the best job.  Sometimes we chose well.  Other times we were disappointed.  Some applicants talked a good game and had good stats as an agent, but that didn’t translate to success as a supervisor.

Bosses instead of Leaders:

People don’t like to be told what to do when they’re working on the frontlines, but it’s amazing how fast some forget that once they’re in positions of power.  Despite examples from the top that show nobody is above doing any job, some new supervisors are quick to take advantage of their new role and start, literally, bossing people around.

Failing to Set a Good Example:

A new supervisor is onstage all the time, and everything they do is scrutinized by the frontline associates.  In their new leadership positions, some feel the rules no longer apply to them.  They work hard, perhaps working additional hours without overtime pay, so if they want to smoke a couple of extra cigarettes and take another 10 minutes at break to do it, they’re entitled, right?  They don’t realize how this undermines their credibility and leaves them in a tough position when they have to discuss a failure to meet expectations with someone on their team.

When a new supervisor comes from the ranks of frontline agents, they bring with them their relationships with those other agents.  Friends may now be expecting better treatment, while rivals and those from other cliques are ready to criticize every move.  The new supervisor doesn’t want to give up long-time relationships, which may involve going to lunch regularly, spending time with each other’s families, or socializing at the bar after work.  “Certainly,” they say, “I can’t be expected to give up my friends!”

Some new (and not so new) leaders tend to “please up and punch down.”  They are all sweetness and light to the center leaders, while releasing their wrath on subordinates if they’re not getting the results that will make the supervisor look good.  Others salute when given direction by their managers, then pass that direction down by saying, “I don’t agree with this, but we have to do it because the bosses said so.”

New leaders tend to be insecure, and insecure leaders don’t like to say they don’t know.  They prefer to keep their information and their questions to themselves.  They do not delegate, as this could be seen as weakness or failure to do their job themselves.

Avoiding Direct Feedback and Failing to Accept It:

Conversations about expectations and shortcomings can be difficult for new supervisors.  They may soft-pedal issues, not wanting to hurt an agent’s feelings.  Then they wonder why their team is not succeeding.  And receiving feedback as a new supervisor can be challenging.  They are used to being the best agents, getting nothing but good feedback.  Now they’ve been promoted and may be receiving criticism beyond what they’ve experienced on the frontline.  Rather than learn from it, they are offended and begin to think they are treated unfairly.

The keys to solving these issues revolve around training, leadership trust at all levels and a good example from the top.  We have had success with new hire training that addresses all of these areas and much more, with role playing and regular reinforcement throughout.

A particularly successful approach for us involved pre-supervisor training.  Those who were interested in supervisory positions applied for this ongoing training, going through panel interviews, and making presentations as they would when they applied for a supervisory position.  Those who were accepted received some of the same training the supervisors got, and they were given mentors from the Senior Leadership team to meet with monthly.

Many of the issues listed will thrive in an atmosphere where top leadership is not involved with the frontline staff.  If an agent on the phone doesn’t know who the CEO is, or can’t pick him/her out of a lineup, that agent is not going to report an issue.  It will get buried rather than take a chance on retribution from the direct supervisor.  The top brass has to be tuned in to the frontline.

Leaders need to learn to approach their positions as described in this poem by Lao Tzu, which I always kept posted at my desk:

Go to the people.  Live with them.  Learn from them.  Love them.  Start with what they know.

Build with what they have.  But with the best leaders, when the work is done,

the task accomplished, the people will say, “We have done it ourselves.”

For help with with the training and development of your leadership team, contact the Taylor Reach Group. Just CLICK HERE to schedule a free consultation.

Gratitude: Now’s the Time to Show It!