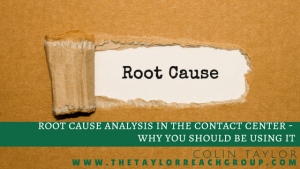 It always amazes me how Contact Center managers, their direct supports, and their superiors often fail to use one of the best tools at their disposal, Root Cause Analysis. Of course, if you are always fighting fires it is difficult to find the time and/or resources to research what is causing the fires in the first place. As with any fire, there is always a cause; a discarded cigarette, an ignition source, lightning etc. There is always an underlying cause for any event.

According to Wikipedia, “Root cause analysis (RCA) is a term used to denote a class of problem-solving methods aimed at identifying the root causes of problems or events. The practice of RCA is predicated on the belief that problems are best solved by attempting to correct or eliminate root causes, as opposed to merely addressing the immediately obvious symptoms. By directing corrective measures at root causes, it is hoped that the likelihood of problem recurrence will be minimized. However, it is recognized that complete prevention of recurrence by a single intervention is not always possible. Thus, RCA is often considered to be an iterative process, and is frequently viewed as a tool of continuous improvement”.

If we go to see our physician we would rather that the doctor addresses the cause of our sickness and not just the symptoms. In our business lives, however, we can often fail to see or understand the causal events that are making our lives miserable. So how can we move from fighting the fires to preventing them? How can we do this without investing in expensive technology, costly consultants and with no additional resource bandwidth? The phrase “out of the mouth of babes” comes to mind. You see, I have been practicing root cause analysis for many years and had developed a fairly robust approach of employing process maps, live call monitors and recording review and stakeholder interviews. All of which has worked quite well and has stood me in good stead with my clients and customers. When babysitting my granddaughter recently I was reminded of another approach and one that is extremely effective for drilling down to a root or underlying cause. “Why is the sky blue?, Why do we have day and nights?,

Why doesn’t the sun go out? Why does the moon move around the sky? Why do the tides move in and out? Of course, anyone who is familiar with six sigma understands the ‘5 whys’. Following my most recent interaction with my granddaughter, I gained a new appreciation for this approach. Again, from Wikipedia, “The 5 Whys is a technique used in six sigma methodologies to help determine the root cause of a defect or problem. Often it takes roughly five iterations of asking “why” to get to the real cause of a problem, although the real key is to just start asking why.”

The 5 Whys Put to Test

The penny dropped, using the 5 whys could be a far simpler tool for quickly assessing the root cause. So, we tried it out on one of our clients:

Client: “41% of all callers were complaining that the service promised was not delivered”,
TRG: “Oh? Why would the service not be provided?”
Client: “The customer must complete some preparation in order for us to provide the service. A lot of times they don’t prepare and blame it on us”
TRG: “So what percentage of the complaints are real and what percent is the customers?”
Client: “I don’t know came the response, we don’t measure that”
TRG: “Ok, so I’ll ask, why don’t we measure that?”
Client: “We don’t have a mandate from corporate to measure it”
TRG: “You said you didn’t have a mandate from corporate. Aren’t there service standards in place?”
Client: “Well yes, there are, but complaints aren’t really covered.”
TRG: “Why aren’t complaints covered?” I asked gamely.
Client: “The operations staff doesn’t want us to measure complaints.”
TRG: “And why don’t they want to measure complaints?”
Client: “Because since some of the customers are lying it will make the operations staff looks bad and they don’t wish to be seen as doing a bad job”

At this point, I had to agree I could see that point of view. After all, who wants to look like they are doing a bad job? The operations staff also completed tens of thousands of service deliveries successfully each month. Though not wanting to bail out of the process, I adjusted course and went back at it.

TRG: “You said there were service standards in place. Is there not a standard for service complaints?”
Client: “There actually is, but we don’t report on it, because it just gets the operations staff upset. They tell us it is only a goal.”
TRG: “Ah ha! So, these are service goals rather than service standards for complaints. So, you don’t track them because a percentage of your customers may be lying. Do I understand this now?”
Client: “Yes, actually you have put it quite well.”

There we have it. Not quite done in the suggested 5 why questions; but the underlying cause for the high percentage of complaint calls is due to the lack of service standards. While management claimed to employ service standards in the case of complaints, they were really just goals. Therefore, they were untracked and unenforceable.
But, maybe I am congratulating myself too quickly. Let’s fast forward a bit through the process:

Then we bumped back into the problem with those lying customers. In all fairness, it was not me who had the epiphany, but rather one of the senior management group.

“So tell me,” the senior manager asked, “is your lying population concentrated in just one sales territory?”

The answer from the client as suspected was “No they are all over town”,
The senior manager smiled, “Good then why can’t we just accept that a percentage of our customers will be less than truthful, because I’m sure the liar density in this town, like others is pretty equally distributed”

I should note the city in question wasn’t Washington DC.

There were more than a few missteps along the way but at the end of the day, we saw the number and percentage of total calls represented by complaints drop from 41% to less than 7%.

Like any improvement initiative, it never comes to an end. I know that today we are still working to improve the success rate for the service standards and we are still looking for those customers who are less than truthful.

A final thought if you: When you ask the question, ‘Why things are done a certain way’ and get the answer ‘because we have always done it that way’; don’t despair. There is always a better mousetrap, a better way of doing things. We just need to discover them. Root Cause Analysis, using the 5 whys and remembering that liars are equally distributed everywhere, can be very valuable tools in helping you to understand why.

Originally Published in Customer Reach Volume 2 Issue 5 – This article was originally published in 2006, updated in 2011 and again in 2018

6 thoughts on “Root Cause Analysis in the Contact Center”