Resolving the Riddle of Retention 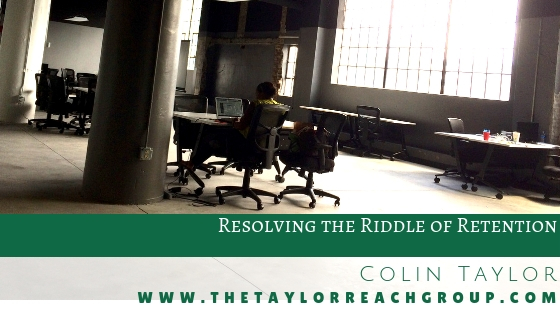 The downside of a strong economy is low unemployment and job shortages. A strong economy doesn’t directly cause contact center attrition, but it does provide employees and agents options that may not exist in a weaker economy. This element of choice, though, will magnify any internal issues and challenges that may exist in your contact center which can contribute to staff attrition.

In this post we will examine issues and challenges we have observed in client contact centers. This post is based on a presentation I gave recently at a contact center conference. The session was well received and every attendee asked for copy of the presentation (you can find the deck online at SlideShare).

The average contact center attrition reported by ICMI was at 33% in 2017, up from 29% reported in 2016. Accepted averages are captive centers at 20% per annum and 100% per annum for outsourced centers.

Of course, different centers will have different results, as averages are just that. One outsource agency we have worked with reported a 365% turnover in six months and a captive center reported a 65% per annum turnover rate, which doesn’t seem too outrageous until you consider that the center in question had both great benefits and good pay.

“No shows” in training can cost $2,500 to $7,000. New hires that quit in nesting or in the first 30 days can represent an investment of $7,000 to $15,000. Of course, your investment costs aren’t just associated with those that leave during training or nesting.

If 30% of your staff is still negotiating the learning curve towards competency, they are by definition performing at a lower level than the veteran staff. This is reflected in lower FCR, longer calls, the need for more coaching and QA resource support, and of course they achieve lower CSAT and NPS scores, costing the organization customers. This “hidden cost” can represent tens of thousands of dollars per month in additional direct support costs even for a small center of fewer than 100 agents. The bigger issue is having a significant portion of your agents in a constantly developing state and the impact on customer loyalty, retention and repurchase, which could cost an organization millions in lost opportunities.

If you are constantly hiring and people are constantly leaving, your reputation as an employer cannot help but suffer, which in turn will make it harder to recruit new staff. This can be a vicious spiral.

Attrition is cited a significant impediment to getting things done in the contact center. 85% of organizations surveyed indicated that attrition is impacting achievement significantly.

Many organizations attempt to reduce attrition by employing some or all of the following tactics;

These are typical responses to addressing agent retention and all of these can be helpful, but if we fail to look at the center holistically then we will overlook other common causes including: 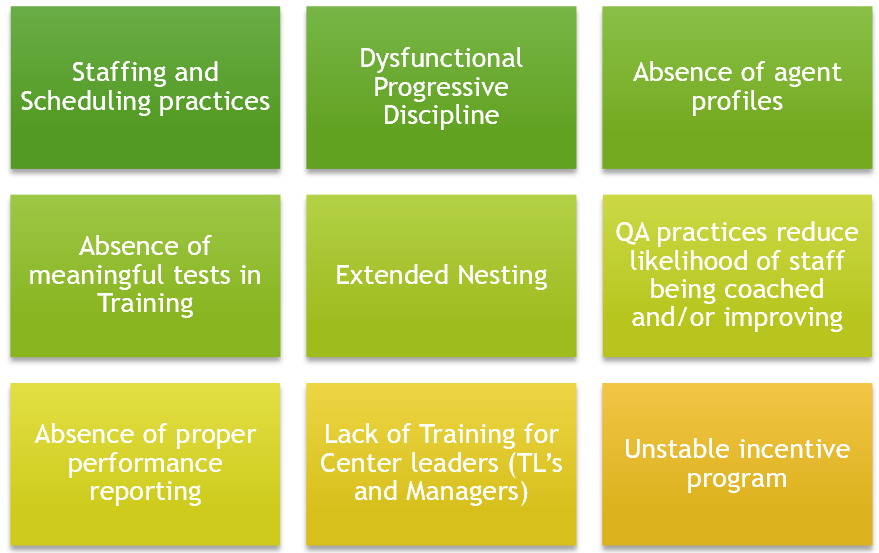 Common staffing and workforce issues include:

Of course, staffing and workforce is tricky, and it drives attrition. But have you looked at where your turnover occurs? Often, it’s with new staff; and when are new staff often scheduled? To the least appealing shift, because the experienced staff has tenure and have secure the coveted “day shift.” So, newbies are working the evening shift, where they will have the least support and guidance as most center support resources also primarily work days. And in the evenings we still get call spikes, so the new staff can be busy as well as being stressed. But it gets much worse than that. Have a look at the chart below: 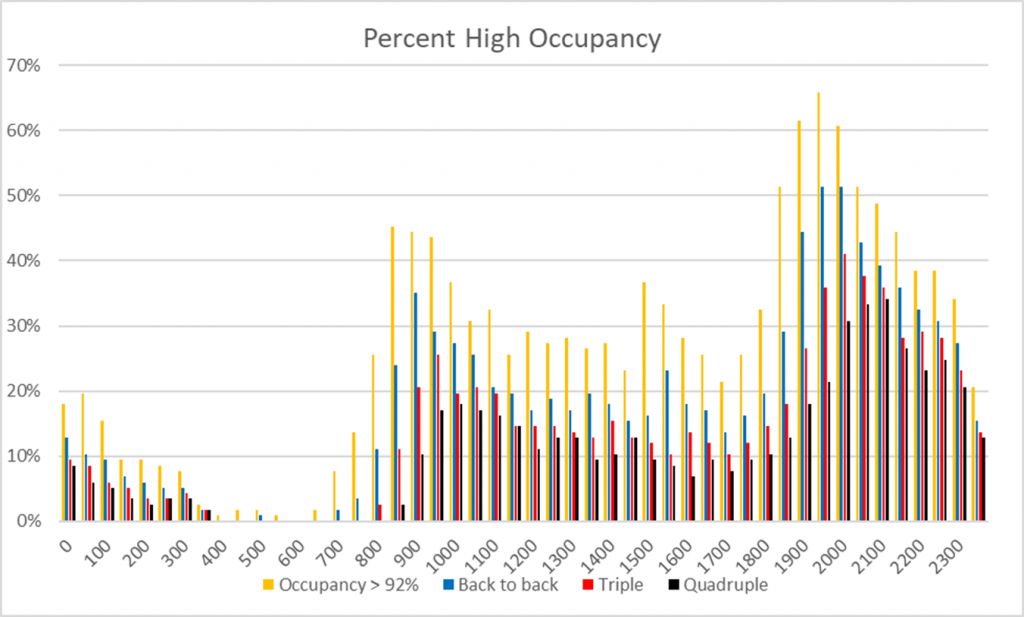 The chart is showing actual data from a client center and it shows high occupancy intervals, here defined as Occupancy over 92%. In this center it is busy during the day shift, but it is clearly busier in the evening. It is also interesting to note the number of high occupancy intervals. The orange shows occupancy over 92% and we can see that at 8 pm (2000), there is 66% chance of that interval being over 92%, a 51% chance that there will be two back to back intervals of more than 92%, a 41% chance of three consecutive intervals of 92% plus occupancy, and more than 30% likelihood that there will be four consecutive periods of more than 92% occupancy. So, we have our new staff; the greenest, least experienced, the ones most in need of support and assistance; working without much support and getting hammered for two or more hours almost a third of time. I don’t know about you, but I think I would quit.

So why do we do this to ourselves? It’s because we tend to look at occupancy across much broader time periods–heck, for the day it was only 73%–and we tend to track intervals based on whether we made or lost service level. As you can see from the chart above the data can tell us so much more. Run this analysis in your center and I suspect you will have an “ah ha” moment.

Many centers don’t employ agent profiles. Without knowing the profile of successful agents, it is very difficult to know the skills, competencies and personalities that will allow agents to succeed. Profiling allows job descriptions, the recruiting process/candidate assessment, training, nesting, and coaching to be better aligned and continually improved.

Human Resources (HR) having an out-sized role in the center, where it should be playing a supporting role.

Performance Improvement Plans (PIP) are not operating as an improvement process, but rather serve as an agent warning system. This doesn’t improve performance but can motivate the agent to update their resume.

Delays in implementing progressive discipline can render the process ineffective and undermine the credibility of center leadership.

The process for Disciplinary Action can be very time-consuming, often requiring many levels of sign-off (center, HR, senior management etc.).

Inconsistent training processes can also create confusion and chaos in your center. Training often delivers different instructions than Nesting. Too many times we have heard “forget what you learned in Training, now that you are in Nesting we will show you how we do this.” There needs to be a feedback loop between Nesting and Training, otherwise nothing gets fixed.

Trainers may have no experience “on the phone,” may not understand the agent and floor perspectives or Trainer may have experience on the floor but not training on how to train. You wouldn’t make the best patient the doctor, so why do we do this with training?

The absence of a Knowledge Base increases new agent confusion. Think of our newbies again on the evening shift with no knowledge base either. Where do they turn for help?

Training is not scheduled at times matching future agent schedules. Why have new staff trained during the day and then have evening shifts? That may just give them a reason to finish training before they quit. Align your training to the times the agents will be working their shift. It is better to have the attrition at the beginning of training when they may be able to be replaced than after they graduate and don’t show for their first shift.

There is limited soft skill training content. Soft skills are often ranked below product knowledge and system knowledge when contact center trainings are designed. They are the first elements cut if we need to rush folks to production. But without soft skills, you are sending them to battle unarmed.

There are no assessments or quizzes employed in Training which could identify agent progress and where they may be having challenges. If you don’t know where folks are struggling, it is impossible to help them. If they don’t ask for help they won’t get any, they will just sit there and nod, until the quit or go the production and quit when they realize they didn’t absorb as much as they had thought.

There is no resource to develop training content. Repeat after me: “PowerPoint is boring.” You don’t like to be subjected to endless PowerPoint slides, so why subject your new staff to this? Studies have shown that actually PowerPoint is a poor way to communicate information regardless.

No tracking of agents and cohort performance post-training to improve training and teaching. If you don’t know how agents and class cohorts are performing downstream, then you can’t really identify who your best trainers are or what areas of the training content should be revised or expanded.

Nesting can be a challenge unto itself. A “no failure” training approach results in agents with a broad range of proficiency (the good, the bad and the ugly) moving to Nesting. This can result in the organization extending Nesting to get agents to a minimum performance level needed to move to production. This often creates an artificial perception of what to expect on the production floor. It can create an expectation of or belief that there is a “safety net” that may not exist once in production.

Quality Assurance can be a source of attrition as well. There is often a schizophrenic and conflicted relationship between QA and Team Leads (TL) regarding observations and coaching. Mix of ‘side by side’ and remote observations can create an uneven playing field. Different coaching approaches between QA and TL’s (immediate versus delayed feedback can create a dichotomy and reduces effectiveness of TL coaching). There can be differing standards for bricks & mortar and for Work at Home (WAH) agents. Many centers are still not using a system to manage QA results and trends, so each QA assessment is viewed in isolation. With no trend reporting or analysis in place which can mean no real improvement or addressing of recurring issues.

Inconsistent coaching and tracking, often due to a lack of training on how to coach adults. Back to my comment about making the patient the doctor. If we want people to succeed in any role, we need to invest and train them to be successful.

Focus on agent quality instead of the center quality and overall performance or customer experience. There is always a perceived bias in evaluations from the agent perspective. They will always believe it is easier to fail than to succeed. Calibration too often devolves into a debate of rationalizing a 6 versus a 7, which doesn’t add any real value to the process. Binary options are always better. Some centers have no “auto-fail,” which too frequently means that people who shouldn’t be on the phones stay there. If there is no connection to VOC or CSAT, we will continue to substitute our perception of what the customer wants for want they actually do want. This is dangerous and short-sighted.

Your performance reporting is yet another area where you may be causing turnover in your center. Common issues include:

If you don’t train them to succeed, they likely won’t. A lack of training of center leadership also drives attrition. There is often no specific training offered to Managers or Team Leaders on Contact Center Management, Coaching and developing staff or support specialties such as WFM, QA etc. This creates inconsistent knowledge and practices, which increases variability, disparate experiences and handicaps the effective management of agents, teams, support functions and centers.

When is Interim Management the Right Choice for Your Contact Center?