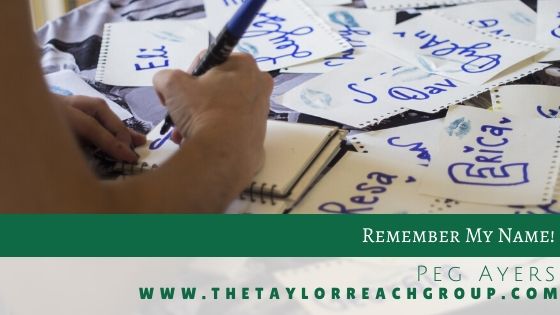 “A person’s name is to that person the sweetest and most important sound in any language.”

Of the many skills required of me in more than 25 years of running large contact centers, one of the most critical has been the ability to remember employee names. When I left my position as Customer Service Director of a firm in Cheyenne, Wyoming, I received a number of letters of thanks including one, from Deb, that still inspires me.

“You knew my name on my first day,” Deb wrote, “and you always spoke and called me by name when we met in the hallway or the break room. Whenever I was promoted or reached a work anniversary, I received a card from you. I received more recognition from you than I did from my own family.”

My relationship with Deb began, as it did with each employee, when I met her on her first day. I always met classes as early as possible, spending half an hour with them and getting to know something about each one. Why did they choose to work for us? What had they been doing before they came to us? (I think the one who told me he’d been in jail was kidding…I think.) I often had members of my management staff and supervisors with me for these initial meetings. One day a young person told us she’d been in college studying German. “Oh,” said one of the managers, “Sprechen sie Deutsch?” meaning, “Do you speak German?” to which she replied, “Oh, I don’t know about all that.” Perhaps it was good she was leaving her studies for a full time English-speaking job.

I met the new classes to help them begin to understand our culture, the importance of their jobs, our open-door policy, the growth opportunities and the need to focus on their training. I also did it to begin learning their names, which I then used at every appropriate opportunity.

In the new hire classes, I would go around the room, asking each person to tell me their first name, where they worked last and why they took this position. As they told me their names, I wrote them down in my notebook, asking for the name a second time if I didn’t quite get it, and then repeating the name back and confirming my pronunciation. As they finished speaking, I thanked them by name, then moved on to the next person. In one meeting, the first two gentlemen had unusual names, and I asked each one to repeat his name for me. When I got to the third, he said, very loudly, “JOE!” He’d decided I was hard of hearing.

I would look for connections that would allow me to remember them when I saw them next time. This would generally be a group of about 20 people, and I wouldn’t get them all right away, but I might remember the person who didn’t really speak German as “German Susie” and the guy from jail as “Jailhouse Benny.” Nobody’s ever going to know how you made the connection, so the sillier the better.

Joe Turner, of Turner Magic, is known for his ability to remember hundreds of names after just one meeting. His Memory Mojo system includes three steps:

Turner says he has greatly improved his ability to remember names because of the third step. He pictures himself writing the name carefully with a fountain pen on high quality paper. He visualizes each letter of the name as he writes it. In social settings, you have to visualize the writing of the name, but when I met classes, I could actually write the names. I did it like a seating chart, so as I pictured the training room later, I knew who was in each seat. I’d look back on my chart the next day, reinforcing the names I’d learned and noticing which weren’t connecting for me yet.

Employee engagement begins with connections and using people’s names is the first step to making those lasting connections. Too many employees feel like numbers and believe those in the corner offices see them that way. By using their names, you show them they matter. It’s the foundation of the trust and loyalty you hope to establish with each one.