Recently Taylor Reach had the opportunity to tour and talk with Joseph R. Morrisroe of New York’s 311 services.
The Call Center, launched in 2003 grew to over 400 staff with full and part-time, now through call and service remodeling has reduced the staff needed to about 280. 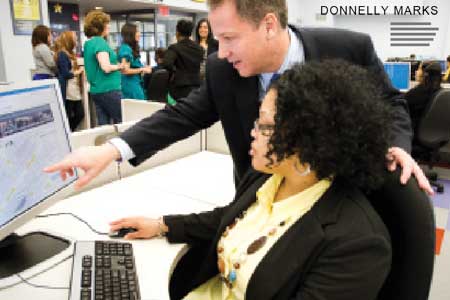 The center takes about 22 million calls a year over half are completed by live agents. The center answers calls about all things New York. One of the most common call types is which and whether parking rules in effect, NY parking rules vary by day, and changes based on holidays and religious observances. The center also receives calls for services not offered by the city such as Subway which is a State agency. These calls for ‘non-city services’ represents approximately 7% of the total call volume processed.

About half of all calls are processed through the center’s IVR. As successful as the current IVR has been Joe is looking for more success. We discussed the success that the City of London’s England has achieved with natural language. Joseph and his team are working with Nuance and Avaya to bring the service to New York. Launch is expected early in the New Year. It is hoped that the new more robust IVR will answer yet more of the simple and frequent questions, ensuring the agents can focus on handling the more complex ones.

The website is a point of pride for 311 center management and staff. To ensure that the website supported the needs of the citizens more than 4,000 individual knowledge points were reviewed and converted from ‘Rep speak’, the instructions that an agent might have to guide a live conversation into instructions for self service on the web. The website also allows citizens to complete common forms on the website. These forms are then routed directly to the appropriate department. With more than 2 million visitors last year the website is certainly supporting the centers objectives.

Text or SMS messages are sent out daily with more than 300,000 sent last year alone. The city has even created an iPhone App, (yes there is an app for that) with more than 2,000 users.

Joseph took care to comment that the center does not do email. The unstructured nature of email does not suit the model of effectiveness and efficiency that the City is aiming for, so this has not been pursued.

Next on the horizon for the 311 center is live chat. Chat has not been a part of the mix to date, but is viewed by Joe as an opportunity to further enhance the service offered to New Yorkers. A new chat service is expected to debut next month.

The center is located in lower Manhattan enabling people from all over the city to reach it easily by subway. The center design was based on Mayor Bloomberg’s experience with contact centers in the financial industry. The result is a very pleasant and comfortable center; the stations are low profile and the office open and bright. This encourages a team feeling and personal and profession responsibility.

The agent wage is locally competitive and fair given the work and the benefits are better than many other centers. Turnover in the last four years has been very low.

Mayor Bloomberg has been a strong supporter of the 311 center and regularly stops by to speak with staff and even to handle incoming calls. He daily reviews the statistics from the center about issues and service delivery in and about the city. There are many smaller enterprises than the City of New York that could benefit from this level of interest and engagement with the contact center.