Leading by Example: What our Supervisors Need to Know 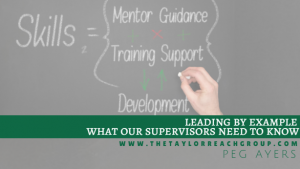 “Do as I say, not as I do.” Nobody says it aloud. But it’s illustrated every day when people give rules and advice to others that they don’t follow themselves. New supervisors can be especially prone to this, caught up as they are in their newfound success and power with shiny titles and salaries to go with them. Some now see themselves as too important to worry about the rules that used to apply. They’ve waited months or years to put those expectations behind them, to show everybody how the supervisor job should be done and to enjoy the perks.

Start times and break times are more fluid now, so there’s no such thing as being late, right? Time spent talking to co-workers is now part of the job, so if there’s a bit of extra time spent visiting, what’s the harm? Frontline people have statistics to meet, but not supervisors—they’re “management” now, right? The resulting low morale and poor performance on these supervisors’ teams should come as no surprise.

“The true measure of Leadership is Influence – Nothing More, Nothing Less.”

John C. Maxwell says, “True leadership cannot be awarded, appointed or assigned. It comes only from influence, and that cannot be mandated. It must be earned.”

How do we help our supervisors earn influence with their teams?

First, we need to be thoughtful about the people we promote into leadership positions. Why does the candidate want to be a supervisor? If it’s all about money and better hours, we need to move on to the next candidate. We’re looking for people who truly want to make things better for the organization and their team. Interview questions need to focus more on personal motivation than on technical skills.

When we provide small opportunities for interested front-line associates to gain an understanding of the supervisor job before they apply, they can learn a lot, and so can we. An on-going training program for prospective supervisors creates a greater understanding of what the job entails. Job shadowing shows interested candidates that the supervisor position isn’t all fun and games. I’ve seen potential supervisors weed themselves out of the candidate pool after just a few hours of working alongside a current supervisor, having discovered they aren’t cut out for the responsibilities of the position.

Supervisor training is equally critical. The skills to reach every person on the team, to treat all fairly and still understand the potential of each one, do not come naturally to a new supervisor: they need to learn and be nurtured. The company’s vision, values and code of ethics must be made to come alive, and every new supervisor needs to know how to apply and explain them. We want them acting like owners in the company, and we have to teach them how. We need to help supervisors see their role on the leadership team as one of responsibility and service, not of perks and privilege.

“An ounce of practice is worth more than tons of preaching.”

The Example Starts at the Top

Most important is the example set throughout the organization. If an atmosphere of privilege exudes from the CEO’s ivory tower, don’t expect stellar servant leadership from the newest members of the leadership team. Front-line supervisors are going to emulate what they see as success.

Front-line associates want supervisors who understand and appreciate what they do. Earl Weaver never played in baseball’s Major Leagues, although he managed the Baltimore Orioles for 17 years. He expressed his management theory as follows:

“A manager should stay as far away as possible from his players. I don’t know if I said ten words to (Hall of Famer) Frank Robinson while he played for me.”

It’s said that one of his players, when asked what he wanted to give Earl for an upcoming birthday, replied, “A day of playing in the Major Leagues, so he’ll understand it’s not as easy as he thinks it is.” Your front-line people aren’t making Major League Baseball money, but they too want their supervisors to understand how hard their jobs are.

That certainly doesn’t mean you want your supervisors doing front-line work all the time. That’s not why you promoted them. But it does mean you want them to be able to step in when the time is right. I’ve seen supervisors earn major points from their team members by taking customer service phone calls for as little as 15 minutes at a time.

Trust is the Key

Trust is the cornerstone of all good working relationships. Morale and productivity are improved when team members feel respected and appreciated when they’re treated fairly and helped to reach their potential. But how do you know how they feel? You have to ask, and you have to have enough trust built up to get a straight answer.

To build that trust, start by walking around and chatting with people. Ask them how things are going and what’s getting in their way. What’s the biggest issue they ran into today? What’s the first thing they’d change if they had your job? When you hear about something actionable, fix it, and give credit to the front-line person who mentioned it first. If you look into something that can’t be fixed, follow up and tell people why. Open-minded listening, with action as appropriate, will build trust and improve processes.

If a supervisor or manager isn’t living the values of the organization, you want to know. Being available and being trusted means you’ll hear when there are issues, allowing you to take action early. I’ve seen many organizations where top leaders had nothing to do with the front-line beyond paying lip service to “our most important asset.” When a supervisor or manager failed to live the organization’s values, nobody spoke up until serious damage is done. Had a trusting relationship existed between all levels of management and the front-line, issues would have surfaced much earlier, avoiding morale issues, productivity drains, complaints and even lawsuits.

If you want supervisors who set a good example, do the following:

The Taylor Reach Group can help you with Supervisor Development and Training, Front-Line Engagement, Management Coaching and much more—contact us today!