Increasing Costs in the Contact Center Due to Increased Efficiency 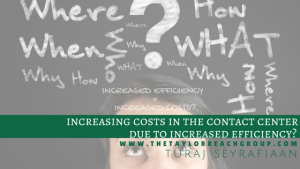 A few years back, I meet with a potential client. During these meetings, I routinely asked about the current operation of the Contact Center, what changes they had initiated (along with the results) and what pain points they were currently facing. In this meeting, she walked me through all the recent efforts in installing new technologies (such as CTI) and procedural changes resulting in a “much more efficient call handling”. She indicated that in the past two years, they had managed to reduce their average handle time (AHT) from 455 seconds down to about 320 seconds. “So, what is the problem”? I asked. Well, apparently this reduction was not good enough!

The business was growing and along with that, the Contact Center had grown in size. However, the center was failing to achieve the target service level, even after lowering the target, and needed even more staff. They were doing a good job forecasting call volumes but did not have enough resources to cover the required schedule. They had increased the staff a few times and as a result, the Contact Center budget had grown much faster than what corporate was providing. They needed more efficiency and she simply did not know other means for gaining efficiency or how much more for that matter.

I asked about call volumes and she was clear that they had a significant increase in their call volume but the increase did not match their sales. Call volume was growing much faster than the sales, hence the pressure on the budget. I asked if I could listen to some calls and also if she could provide a history of their call volume. The calls were rather straight forward and seemed to be complete but rather rushed. I could see the agents paying attention to the reader board, number of callers in the queue and noticed a desire to move to the next call and helping the next customer.

One of the calls, however, brought me closer to what I had expected. The caller had recently ordered a product and simply was looking for basic information regarding usage of the product. The information should have been provided during the first call but obviously, was not. A quick chat with the agent confirmed that they used to provide such info but in order to reduce the AHT, they were told to minimize such conversation especially during the busy hours (which happened to be almost all the time!).

Looking at the call volume tracking for the past 3 years, one could establish changes in the way call volumes were growing. After sharing the graph with the Contact Center manager, she confirmed that those changes matched their efforts in reducing AHT – although negatively! Interestingly enough, they were aware of the volume increase but not the changes in how fast it was growing as they were always looking at a shorter time frame!

What about First Call Resolution (FCR)? They did measure FCR internally using sample calls, which did not indicate any decline. However, later on, I could see that the quality team was focusing more on compliance and less on the customer experience (CX). In effect, the agents were expected to answer customer questions if and when it was brought up by the customers! An external customer survey, or even crude modeling/disposition codes (how quickly a customer calls back regarding the same purchase) would have provided different results and proven insightful.
So, what was the problem and how did they fix it?

The problem, as it turned out, was a simple but common mistake of focusing on AHT instead of the total workload. Any attempt at efficiency must consider the impact on the call handling and call volume. In this case, by pushing for shorter AHT, the center had changed the call handling process and as a result also changed (increased) the ratio between the number of calls and number of sales. Customers were not receiving full information because they did not know what to ask until after they received their product and therefore had to call back. The calls were efficient from a technology and compliance standpoint, but clearly not effective from total customer experience perspective.

Adding to the problem was the false sense of accomplishment coming from their ill designed quality process. It is important to measure quality in form of compliance but that does not provide the full picture. If they had a robust or even a decent customer survey focusing on customer experience and true FCR, the alarm would have sounded much earlier.

Working with the client, we calculated a more accurate measurement of FCR and call volume per sales. Indeed, they did not have enough staff under the current situation. Doing reverse analysis, we were able to calculate what they needed in terms of FCR in order to reach their target service level with the existing staff. At the same time, in a parallel work, we analyzed all their processes, established where they had failed in achieving higher FCR and based on what reasoning. The good news was that with a little training and minor changes to the existing processes, the center could reach that desired level of FCR.

And here comes the hard part! In the analysis and recommendations, we allowed for much higher AHT and in practice, we told the agents not to worry about their AHT. In fact, we turned off the reader board! As a result, the AHT ballooned to 420 seconds and the center had a miserable service level.

However, after a few weeks, call volumes started to drop as FCR started to improve and at the same time they started seeing a natural reduction on AHT. Little by little service level started to recover and improve.
After about 6 months, the center AHT became stable at 380 seconds while the FCR (true FCR) almost doubled and continued to improve! It’s really interesting to see how that extra 60 seconds can improve the overall service and budget so much.

Not every Contact Center runs into this type of problem and indeed most efficiency improvements result in better service at reduced costs but then again, there are times when increased efficiency is not a good thing!